The cap’lazz are the symbolic dish of cuisine from Ferrara, the apex of one of the greatest agricultural products from the region

This pasta was named after the straw hats worn by farmers in the past (called cap’lazz in local dialect), which it resembles. For centuries, pumpkin was one of the main sources of nourishment out in the countryside. Those from Bologna good-naturedly call people from Ferrara magnazocca (pumpkin eaters), thereby confirming the origin of the product, quite different than Bologna’s tortelloni.

The first written recipe for pumpkin cappellacci is from 1584, published by Giovanni Battista Rossetti, cook to the court of Alfonso II d’Este, in his book Dello Scalco. Over the years, the recipe has changed radically: initially it called for ginger and cinnamon in the filling in pure Renaissance style, but as time went on, cappellacci became a dish of the people. Today, only nutmeg remains as a spice to remind us of the recipe’s glorious past.

Preparation
Create a mound with the flour, then create a dip in the middle. Mix the eggs with a fork, then pour them into the dip in the flour mound and mix with your hands, slowly. Once the dough is a dense, smooth ball, let it rest for fifteen minutes. Roll it out with a rolling pin or, as it’s called in Ferrara, a sgnadùr.
Cut the dough into squares about 6-7 cm on each side and spoon a bit of the filling onto the centre of each one. Fold over to connect the two opposite corners of the square, creating a triangle, then press well with your fingers to join. Cook the cappellacci in boiling water. They’re ready when they float at the top of the water. Scoop them out with a slotted spoon or ladle. Serve with melted butter, sage and “parmigiano” cheese on the top, or with meat sauce. 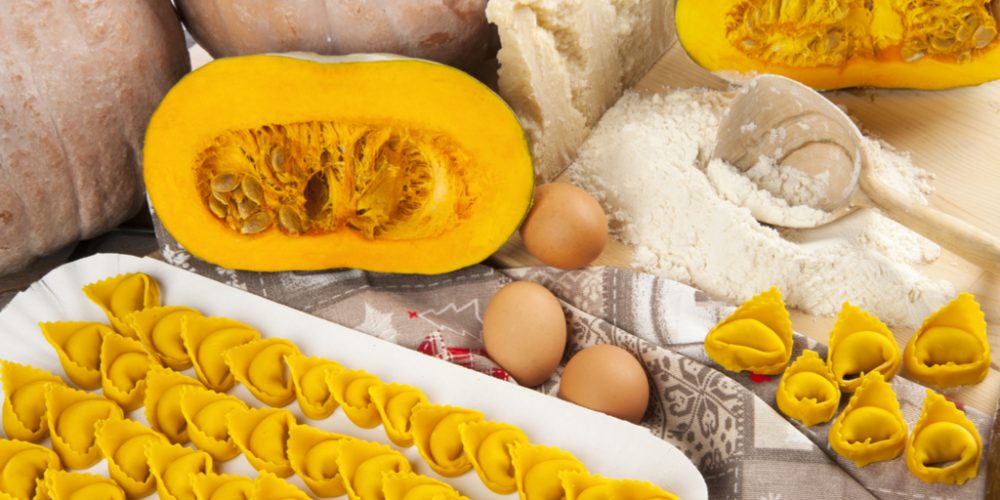 De Nittis and the Revolution of the gaze

From 1st December 2019 to 13th April 2020 Palazzo dei Diamanti dedicates an exhibition to Giuseppe De Nittis. A prestigious selection of [...]

A Evening at the Theater

The Teatro Nuovo was built on the project of engineer Sesto Boari between 1925 and 1926, located in the historic center, in Piazza Trento [...]