L’arte per l’arte – Painting the affections: Sacred art in Ferrara from the 16th to the 18th Centuries

“L’arte per l’arte” returns to the Este Castle. Following a project formerly organized by Comune di Ferrara, here is presented a little known artistic heritage of great significance for our city and a journey through time from the sunset of the Este dynasty up to the Enlightment.
After the exhibition of works by De Pisis, Boldini, Previati and Mentessi, from the Modern Art Galleries of Ferrara, now it is the turn of the paintings owned by the ASP - Centro Servizi alla Persona di Ferrara – that have been on long term deposit at the Musei di Arte Antica since the 1970s.

From Mannerism, Naturalism, and the Baroque, this itinerary includes fascinating and unexpected painters, among whom Scarsellino and Carlo Bononi stand out for their quality and originality. Then, we will be introduced to other personalities, such as Bastarolo, from the late Fifteenth Century, Gaspare Venturini, the mysterious Giuseppe Caletti, to move up to the second half of the Seventeenth Century, with Giuseppe Avanzi, Giacomo Parolini and Giuseppe Zola.
But why “Painting the affections”? To evoke the emotional and familiar language that develops after the “Concilio di Trento”, when art was required to act as a mediator between the faithful and religion, through the visible and the invisible, through naturalistic form that are familiar and act on the emotions. At the same time, the title recalls the humanitarian vocation that is behind the institution where the canvases came from: the institutions created to help those in need, such as orphans and women in trouble. 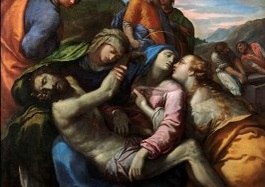 The Hotel Touring is waiting for you to celebrate together a blazing New Year’s Eve in the Estense magical city.  Thanks to our [...]

De Nittis and the Revolution of the gaze

From 1st December 2019 to 13th April 2020 Palazzo dei Diamanti dedicates an exhibition to Giuseppe De Nittis. A prestigious selection of [...]

Do you love wine and you have never visited the city of Ferrara? If you are free on Saturday 18th and Sunday 19th January, you ca [...]

A Evening at the Theater

The Teatro Nuovo was built on the project of engineer Sesto Boari between 1925 and 1926, located in the historic center, in Piazza Trento [...]